This even was for the meter boat classes, Folboats and Dragons. A small fleet gathered last Thursday in sunny summer resort of Hanko, the most South Westerly point of Finland blessed with a beautiful natural harbour, beaches, forest and for Dragon sailors an ample choice of bars and restauranta.

Racing kicked off on Friday in a blue sky but windy and high wave conditions.  Not a traditional windward, leeward regatta but start off the beach close to Hanko city center. After the start, you had to navigate between a few islands and rocks in search of the windward and leeward marks.  Given the conditions especially the downwind legs were very exciting and with a very equally matched fleet of Dragons racing was very close. Mikko Jaatinen sailing with both his sons managed to win the opening race. In race two the wind conditions piped up and a new team of young sailors who only bought a boat a few weeks ago managed to win race two in exhilarating conditions.

On Saturday racing was blown off due to high wind, it allowed the fleet to recover from the night before as nightlife in Hanko is legendary…………..life bands and DJs rocked the place.

On Sunday racing would be close, 3 top boats on equal points could take the win. To make up for lost racing on Saturday the fleet started early and has 3 races. In calm but shift conditions racing remained close and lost of place changing ensued. Sami Salomaa racing as the guest helm on Timo Nurmilaukas boat FIN 72 had a clean and fast start and lead all the way around. In race 4 the wind continued to shift to the west and Mikko Jaatinen FIN 86 had a very clean start and lead the fleet by some margin. Further back there was however a battle around the course and there was a photo finishes between the next four boats.

With ominous clouds on the horizon the last race of the day got off to a quick start, the fleet was again very close but especially on the upwind legs the were lots of places changing. The only female helm, FIN 89 Sara Antila with crew Rudy Jurg and Mia Eklund showed tremendous downwind speed making up for some of the tactical losses on the upwind legs. As the wind dropped away towards the final downwind finish she managed to hold her place cross the line in second place.

No sooner had the fleet got back into harbor the heavens opened but did this not spoil the prize giving. Dragon class captain Mikko Jaatinen took home the winner trophy, Sami Salomaa second and Sara Antila third.

Next is the Finnish Nationals for which we hope to attract a fleet of approx 20 boats. 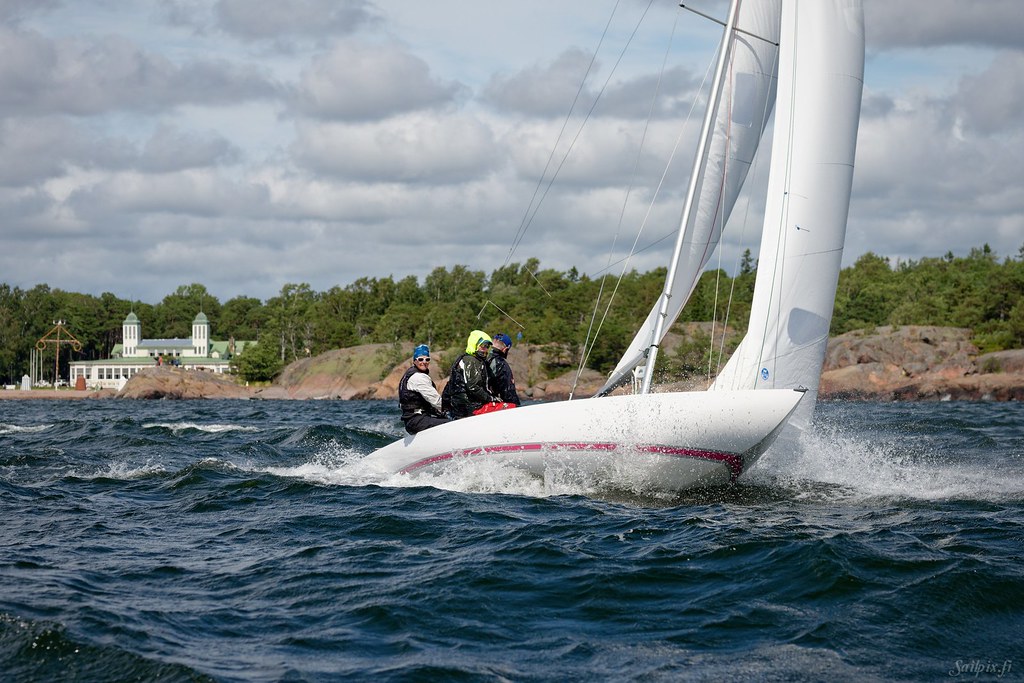